05/12/1996
In my last year of art college I presented a parody of an exhibition of hard-edged abstract paintings, together with a guide in the form of a booklet. This is the text plus accompanying images.
Introduction

In 1996, whilst still at Central Saint Martins College of Art in London, Stuven (b. 1969) began work on a series of five hard-edged abstract acrylic paintings on canvas which he presented in college later the same year.
This guide will explore the genesis, themes and related concerns of the work, and concludes with a short interview with the artist.

Each painting is comprised of a grid of 4x4 rectangles, with each rectangle divided diagonally into two triangles, one black, the other yellow. This results in four distinct rectangle 'types' (fig.4). Combinations of these rectangles produce the paintings' distinctive patterns. 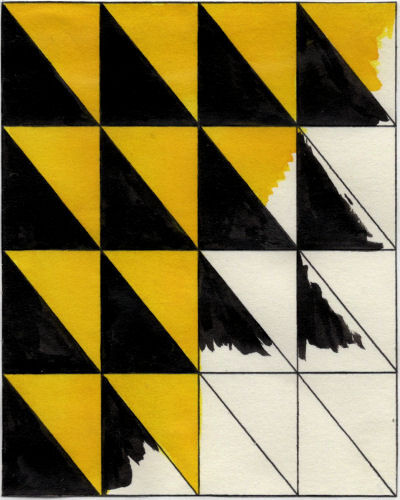 (fig.1) Untitled study for painting no.1, 1996, ink and watercolour
In marked contrast to the work Stuven produced immediately prior to Expatiate Extempore, such as Apollo 1, a critique of space as exemplified by the NASA Apollo missions, the former work appears to return to the concerns of late 1993 to late 1994. In this earlier period Stuven was intrigued by the formal qualities of industrial hazard imagery. The triptych Hazard Barrier No.1 is generally agreed to be the first fully realised work to use the stark black and yellow chevrons that reappear in Expatiate. The multiple-painting format occurs time and again in these industrially-inspired works.

(fig. 2) Hazard Barrier No.1, 1993, acrylic on canvas
Whilst still within the tradition of painting, this and similar works appear to convey a desire on Stuven's part to remove the trace of the artist's hand. Neither figurative nor abstract, they function in the world of signs, of Johns-like visual readymades - both sign and painting of a sign (2). In the summer of 1994, Stuven appeared to have grown tired of the hazard tape format, which had culminated in June of that year with the large polychrome wooden sculpture Broken Barriers (fig. 3). 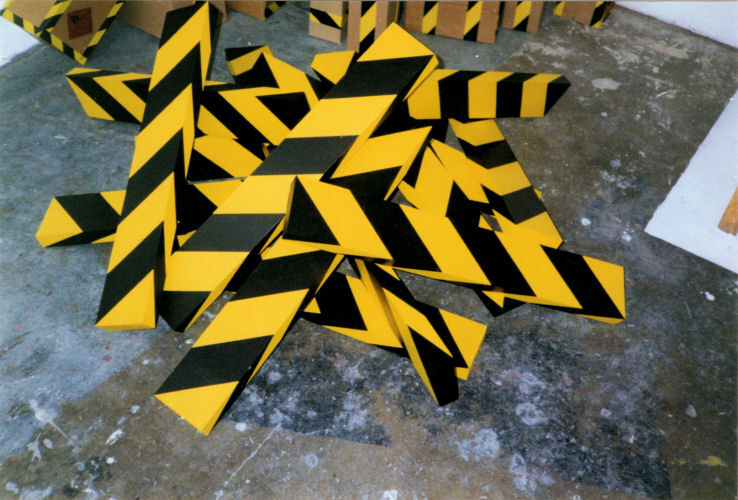 (fig. 3) Broken Barriers, 1994, acrylic on wood, 14 pieces
Here Stuven uses the clean lines of the barriers to create spatial and aesthetic discord, suggesting that the semiotic power of the industrial signs can be overcome... or at least reduced to less oppressive proportions.

Until mid-1996, Stuven immersed himself in the cultural flotsam of alien-Grey conspiracy theories, pre-millennial fears, low quality TV science-fiction and the Apollo moon landings, only to drift slowly away from pop-culture and pseudo-science.

The five paintings are each dated on the reverse, and may read as chronologically sequential, from 25/11 - 4/12/96. At the Central Saint Martins presentation they were hung in order of facture, and were intended to be read from left to right. As one progresses through the sequence one is able to discern a change from order to disorder, or more accurately, from a simple state to a complex one. There are four types of rectangle which Stuven codes as A, B, A- and B-. Each minus rectangle may be thought of as a complementary of the positive. In a number of related sketchbook drawings one can see Stuven exploring various lines of development inherent within the sequence (note that this is not the sequence eventually used).

By combining the various studies of the five paintings it has been possible to decode the sequence by which they were produces. This shows that each painting's code of rectangles is more complex than the last by an increasing factor. Thus for example, the code for no. 1 is simply a repeating A rectangle. For no. 2 it is increased to A, B, A, B, etc. By the third painting the code has altered by two elements: A, A, B, A, B, B and so on. The ensuing abstract pattern is far removed from the initial one. The number of paintings possible using every permutation of the code has been calculated at 65,536. 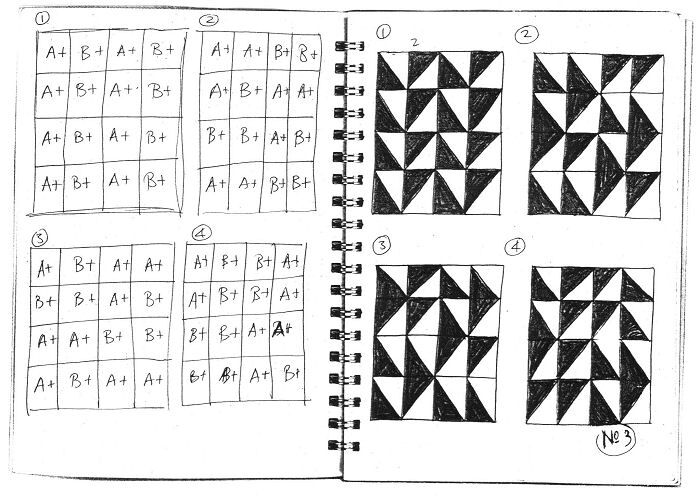 Interviewer: What was it first made you use things such as barriers, exit signs, hazard warning tape and so on as starting points?

I: and what was the attraction of de-personalised elements?

S: I was interested in things which suggest the world rather than the personality. Of course, I've come to the understanding that even the choices I made about those objects suggests something about me, and of the secret power in coding personality within those objects.

I: (pause) Expatiate Extempore is clearly related to your earlier work. Why did you choose to work in a style with very little reference to contemporary art practice, one perceived by many to be at the very least conservative and somewhat conventional, for example in its use of the Modernist grid?

S: I wished to create an apparently autonomous, apparently system-based art which would appeal to neither the old high Modernist arbiters of aesthetic quality nor to the critical and cultural theorists of Post-Modernism, without losing some form of critical content and Modernist aesthetic.

I: Janet Wolff has argued that all works of art are to a greater or lesser extent about politics.(3) Would you agree that the political content of this work is intended to be open to multiple readings, and to resist grounding in any one particular ideology?

S: I would be happy if the work reflects my ambivalent and complicated (not to say confused) attitude towards both overt ideological influences, of any persuasion, and of claims for the autonomy of art.

I: How did you arrive at these particular configurations? Were they the only ones that the logic of the 'code' suggested?

S: No. I chose these in order to best illustrate the change in their coding. For example, in painting number five the code is so complex that it doesn't begin to repeat itself until rectangle thirteen. By then, of course, there isn't enough left to discern a pattern. Each of the pieces is carefully chosen to appear, when seen in sequence, to have mutated from the previous painting, yet retain enough features from the preceding one for the code to be deduced.

I: Why did you present five abstract paintings in this way? Isn't it somewhat perverse to encourage a narrative reading of what are, in essence, formal exercises in composition and aesthetics?

S: Well, their sheer theatricality rather than having a degenerative and negative effect, for me at least, enervates the whole experience of the work. Whereas the colours are meant to distance the viewer somewhat, I hope that the viewer will be drawn in by the desire to decode the structure of the paintings. If anything, the mild tension this creates may be seen as perverse, but only gently so.

I: Can you say a little about the title of the work? Is it meant to allude to your often-stated interest in space and time?

S: To expatiate is to dilute, to range over a subject or to explain profusely. The adverb extempore means 'done without prior preparation or thought'. I wanted to give the impression of a work totally at odds with its title. The work gives little information away easily and requires essentially pointless thinking.

I: Did you anticipate the work to be seen as a personal metaphor for your practice?

S: Initially, no, but I soon saw how it could subtly refer to my own inability to come to terms with meaning.

I: What did you hope to achieve at the college presentation?

S: I hoped to present an apparently transparent and mundane work, and by means of manipulating the manner of the presentation, muddy the waters of meaning a little. 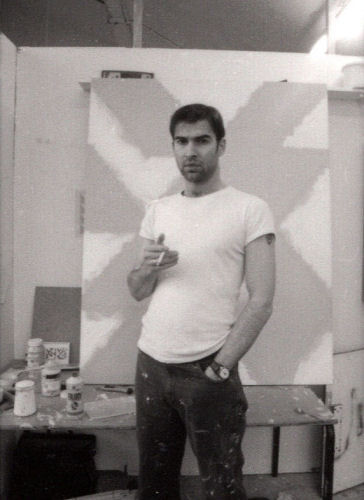