23/09/2020
There are those artists who neither need nor have what is called a 'studio practice', and there are others for whom it is essential. What is it, then, that makes a studio so important for a certain type of creative?

The studio is a refuge

On my Instagram account is a picture of my previous studio on the day I moved out. It is a blank, white three-sided cube, empty save for a grey plastic bin I left in the corner. It is for me an enormously sad image: it represents a complete withdrawal, a removal of an essential space. My very first Instagram post is of the same space, but then full to the brim with my possessions: paintings, pencils, pens, papers and all the paraphernalia of a working artist's space.

However, the objects are there for other reasons, not just for practicality. Firstly, I am loath to throw away anything, and keep lots of odd bits of equipment, drawing papers, off-cuts of wood and various interestingly-shaped plastic packaging "just in case" it may ever come in handy. Considering the amount I keep, this is hardly practical.

But perhaps more importantly, the studio is a space that I can call truly mine, even though I only rent it. As such the objects mark my ownership of the area and validate it as a working space, and by extension, me as a viable artist. That is why it is so important for me to have a dedicated artist space. Filled with my things, the space is a private expression of who I am, or more importantly, what I do and what I have done.

Early on at art college, I began collecting images of artists in their studios, mostly photographs of famous 20th century artists such as Jackson Pollock, Francis Bacon and Eva Hesse. I was fascinated by the way their working space seemed to echo the kind of person I imagined them to be. De Kooning's wooden chair, for example, in his East Hampton home studio looks like a throne from which the restless king surveys his realm. And at the time was indeed the king of the American art world. Gerhard Richter's studio is as austere as the pithy comments he makes on art and the process of making art, both indicators of a rigorous mind uninterested in fripperies, and an artistic space in which to ponder the nature of the image in a post-photographic world. Picasso's early studio in Paris, the 'Bateau Lavoir' epitomises the romantic, shabby bohemian lifestyle, while his later mansion studios when he was old and rich, have the air of an elderly, jaded collector's hoard, with the old man picking through the jumbled piles of art detritus, a metaphor for his own chaotic past. Mondrian's studio was clearly a template for how he envisioned the ideal life.

All the images I collected showed that the studio could be any number of things: a laboratory of new ideas, a workshop for the manufacturing of artisanal goods, a monk's cell for the contemplation of higher thoughts or a let-it-all-hang-out party zone for wild happenings and crazy characters. Whatever its use, the studio somehow reflects the practice of the artist, whether by chance or design.

What then, of my own studios and my own meagre practice? Not counting my college studios, I've worked in about six different places. strangely, I don't have any documentation of the first three, mainly because it didn't occur to me to record them. Now that I'm feeling in a more reflective mood generally, I regret not making a permanent record of those earlier ateliers. My current studio is possibly the smallest space I've had to work in. This situation is not helped by its doubling as a storage space. Years ago I attended a talk by photographic artist John Goto, who said that all artists have a problem with storage. I think I only understand now what he meant.

The picture below is my studio just after I had placed everything in its place but before I began to personalise it with images and my own artworks for inspiration, or even used it for the first time. It took me a day to move my things from storage and haul them up one floor to where my studio is now. I have no idea whether I'll get to use any of this stuff or if I will at some future point, in a fit of pique or exasperation with my own stupidity, bin my collection of flotsam. The space itself probably measures no more than 2.5m squared. Ideally, of course, I'd make more space by selling some of the larger works which can be seen behind the drawing table stacked against the partition. I'm fortunate that I can move a little outside the space in order to stretch canvasses, cut wood etc,. Currently, however, I am working on smaller pieces and studies on paper. Perhaps next year I'll feel comfortable enough to start making larger works. But the more work I make, the less space I'll have... unless I can offload some pieces. Let's see how things go. I'm happy for the moment just to actually have the space. 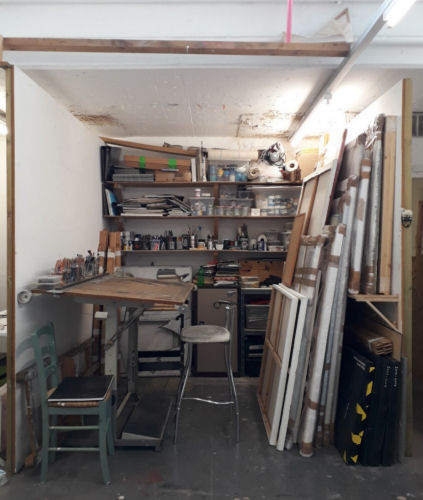